Meeting and assistance on arrival & transfer from airport to hotel.

Overnight at the hotel

After breakfast, proceed for the guided city tour of Old & New Delhi. In Old Delhi visit the historic Red Fort (only photo stop from outside) – Shah Jehan’s elegant citadel in red sandstone. Very near the Fort is the Jama Masjid (Friday Mosque), India’s largest mosque, also built by Shah Jahan. Take an interesting walking tour through the famous bazaars of Chandni Chowk, which is adjacent to both the Fort and the Mosque. Also visit Raj Ghat – the memorial to Mahatma Gandhi. Afternoon guided sightseeing of New Delhi & visit India Gate, the memorial of the First World War and the road that leads from there to President House, which is flanked by the houses of Parliament and the Government Secretariat buildings, Birla Temple.

Visit Lotus Temple – although the temple belongs to the Baha’i sect, is open to people of all faiths. Baha’i religion, an independent, is a very important prayer and meditation tools to progress in the human. (Closed on Mondays)

Visit the Qutub Minar, a Tower of Victory that was built in the 12th century by Qutbuddin Aibak. You will observe the earliest examples of domes and arches in India and see the fusion of Hindu carving skills with Muslim technology and design,overnight at the hotel.

Visit Akshardham Temple and witness the essence of Hinduism at Akshardham Temple one of the biggest and most intricate religious places of worship ever constructed. A visit to this monument is a journey though the gateway to the essence of ancient India and the best of Hindu culture and Vedic civilization. The monument is a fusion of pink stone and pure white marble, where pink stone symbolizes bhati in eternal bloom and white marble that of absolute purity and eternal peace. (Closed on Mondays)

EVENING VISIT OF KINGDOM OF DREAMS

The ultimate entertainment and leisure destination, sprawling across acres of land, the carnival that is India is distilled into one iconic destination. This fabulous Kingdom brings to life a blend of India’s art, culture, heritage, craft, cuisine and performing art…all with the technological wizardry of today. It is designed and conceptualised to offer international and domestic tourists a breath-taking, magical Indian experience. It showcases modern & traditional India in an entertaining format to all visitors.

Nautanki Mahal: showcasing an extravagant cinematic and theatrical musical. Culture Gully: an elaborate culture, arts, crafts and food boulevard. Showshaa Theatre: a fabulous, colorful drama marquee spotlighting Indian mythology productions, a mock wedding show and the great Indian talent circus. Iifa Buzz: a glamorous Bollywood themed cafe. This is a destination in itself which is capturing the imagination of the world. Get ready for this century’s most novel tourist destination.

SHOW OF ZANGOORA – the Gypsy Prince at Kingdom of Dreams. India’s answer to Broadway, Zangoora the Gypsy Prince – The biggest Bollywood musical ever. Introducing a brand new genre of entertainment where storytelling & Bollywood style Song & Dance meet stagecraft and technical wizardry like never seen before. In a world class theatre Nautanki Mahal, enter a world of entertainment that brings the best of Indian and International talent to create a Bollywood spectacle live on stage that is truly cinematic. (Closed on Mondays) Timings: 07:00 PM (Wednesday, Friday & Sunday)

Breakfast at the hotel Rest of the day at leisure for independent activities. Dinner and Overnight at the hotel

After breakfast, drive to Agra. On arrival check in at the hotel.

Afternoon visit the majestic marble edifice, Taj Mahal. The Mughal Emperor Shah Jahan built the Taj Mahal in the memory of his beloved wife, Mumtaj Mahal. Taj Mahal, the epitome of love and romance stands on the banks of river Yamuna. The architecture is considered as the finest specimen of Mughal style of architecture. The architecture is highly inspired from different styles of architecture, which includes Persian, Indian and Turkish. Taj Mahal architecture is truly splendid and one of its kind in the world. The design & layout of Taj Mahal never fails to enrapture architects, engineers, historians as well as common man. (Closed on Fridays)

the Taj – A show which has taken seven years of chiseling and carving by 28 craftsmen and designers. Made in pure white Makrana marble like the original 17th century monument, a TajMahal replica. The workmanship and stone inlay work closely resemble the original. This programme has exciting and innovative presentation of a song and drama spectacle involving 60 artists, they have tried to merry the traditional media with the latest gadgetry, audio visual technology, including laser. The Taj will be presented in 10 different moods, representing varying seasons and hours of the day.’ The model of the Taj will appear on stage with the help of a hydraulic lift as laser beams dance all over, creating an ecstatic climax for the spectacle titled ‘Mohabbat -the Taj’. The show will a love story set in the 17th century ambience and woven around the Taj. The replica of the Taj will continue to be open to the public even when the show is over, said by one of official at Kalakriti. Timings: 06:15 PM

After breakfast, we will take you for sightseeing tour of Agra which includes beautiful Taj Mahal.

Visit Agra Fort is among the finest examples of the fusion architecture that has dominated the Mogul period. The assimilation of these different styles has given the buildings within the fort a distinctive look. To name a few, for example, the Jahangir Palace built by Akbar is the most magnificent blend of Persian and local style whereas Divan-e-Aam mixes subtleness of Turkish exteriors with the complex pattern of Persian architecture. Babur stayed in the fort in the palace of Ibrahim.

After breakfast, you will drive to Jaipur; while driving towards Jaipur you will stop at Fatehpur Sikri for a brief period.

Fatehpur Sikri was once the capital of the Mughal Empire. The city boasts of some of the magnificent monuments of the medieval period. Akbar, the great Mughal Emperor, made it the capital but was later abandoned due to scarcity of water. The buildings at Fatehpur Sikri present a unique blend of Hindu and Islamic architectural styles. Some of the attractions at Fatehpur Sikri are the Panch Mahal, the Buland Darwaza and the Dargah of Sheikh Salim Chisti.

On arrival, check-in at hotel. Rest day is free for own activities.

After breakfast, you will explore the massive Amber Fort (ascending the fort on elephant back). This morning you will drive 11kms in the outskirts of the city to visit Amber Fort, the ancient capital of the State until 1728. Visit the Temple of Kali, the Hall of Victory or Jai Mahal and Jagmandir. You can have the unique experience of traveling on elephant back to and from the top of the hill on which the fort is situated. It has halls of Public and Private Audience, a Sheesh Mahal (hall of mirrors) various marble palaces which are marvellous examples of ancient Rajput architecture. The Temple of Amba (Mother Goddess), the patron deity of the Royal family is at the entrance to the palace.

Afternoon city tour of the pink city, visit the City Palace – the former royal residence built in a blend of the Rajasthani and Mughal styles which houses a museum with a superb collection of Rajasthani costumes and armoury of the Mughals and Rajputs, including swords of different shapes and sizes with ornate handles. It has an art gallery with an excellent collection of miniature paintings, carpets, royal paraphernalia and rare astronomical works in Arabic, Persian, Latin and Sanskrit.

Also visit the Jantar Mantar – an astrological and astronomical Observatory built by Maharaja Jai Singh in 18th century, which is remarkable for its accuracy even at the present times.

Stop at Palace of Winds for taking pictures. Later back to the hotel & rest.Overnight at the hotel.

In time transfer to Jaipur airport to board flight to Dubai.

Get to know the glamorous “City of Gold” on a full-day sightseeing tour. Situated between the sparkling waters of the Arabian Gulf and empty deserts of the UAE, glittering Dubai is both relaxing and exciting, with its state-of-the-art architecture, cutting-edge leisure amenities and vibrant atmosphere. On your tour, explore both shores of beautiful Dubai Creek, the city’s central waterway, to experience the two contrasting sides of the metropolis – the old town with its charming courtyard houses topped with wind-towers and the glitzy 21st-century city with its cloud-piercing skyscrapers. Ride the high-speed elevator to the observation deck on the 124th floor of the soaring Burj Khalifa*, the world’s tallest building and Dubai’s showpiece tower. Marvel at the breathtaking views from here down over the city, sea and distant desert, and enjoy lunch in the iconic Atlantis The Palm, the monumental hotel rising from the man-made archipelago of the Palm Jumeirah. Other highlights include visits to Dubai Museum* and the Dubai World Trade Center, and time to browse the traditional Spice Souk and shimmering Gold Souk. During your tour, stop for photos at the iconic sail-shaped Burj Al Arab hotel, and enjoy time to browse for souvenirs and designer goods at Dubai Mall. Spend this evening as you wish, perhaps enjoying Dubai’s varied dining scene or relaxing at your hotel.

Enjoy a full day at leisure, take time to explore Bangkok at your own pace or do some souvenir shopping around town, or some optional tours.

After enjoying your breakfast this morning, we transfer to the airport for your flight home 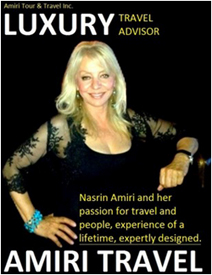